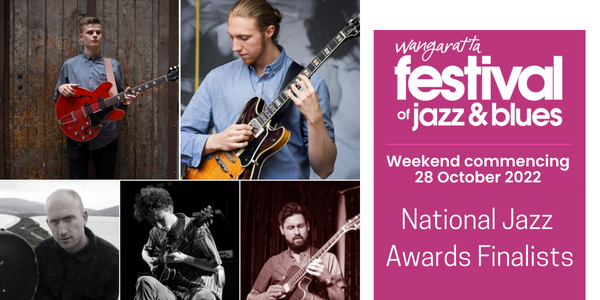 A big congratulations to the 2022 National Jazz Award finalists.

Five of our country’s finest young jazz guitarists have been selected as finalists in the 2022 National Jazz Awards. Harry Tinney (VIC), Joshua Meader (NSW), Julius Schwing (TAS), Theo Carbo (VIC) and Peter Koopman (NSW) will compete for the prestigious honour with a live performance at the Award finals to be held at the Wangaratta Festival of Jazz and Blues on Saturday 29 October.

The winner will receive $7000 in prizemoney and a recording session at Pughouse Studios (Melbourne) with second and third placegetters set to receive prizemoney sponsored by the Rural City of Wangaratta of $4000 and $2000 respectively.

Entries were submitted anonymously to the judging panel, which was led by award-winning guitarist and 2002 NJA co-winner Stephen Magnusson with Fran Swinn and Carl Dewhurst, both celebrated musicians, rounding out the judging panel.

“The panel would like to thank all the guitarists who submitted entries to this year’s National Jazz Awards and congratulate you on your outstanding playing and commitment to this art form. It was a difficult task to narrow it down to the final five. We are very excited to hear the finalists perform to a live audience in Wangaratta. There is nothing more exhilarating than live music,” said Stephen Magnusson, Chair of the Judging Panel.